The Story of Nativity Jesuit Academy

Nativity Jesuit Academy opened in 1993 as Nativity Jesuit Middle School. In the years leading up to the school’s creation, the Wisconsin Province of the Society of Jesus (Jesuits) felt the call to respond to the growing demand for quality, Catholic, high-performing schools that would serve Latino families in Milwaukee. The Jesuits decided to establish a school for Latino boys that would set a foundation to develop future Christian leaders in the community. The first leaders of the school were Rev. Bill Johnson, S.J. and Larry Siewert. Fr. Johnson knew that he would need a strong partner to bring this mission to fruition, so he contacted Siewert, his former football coach at Marquette University High School. Siewert not only agreed to help with the project, but he committed to serve as the first principal of the new school.

Nativity Jesuit Middle School’s first years were housed in St. Patrick’s Parish on the south side of Milwaukee. In 1993, the school opened its doors to 14 incoming sixth graders. Following the national Nativity model of education, the students began their first school year with a summer camp experience that combined learning, prayer and fun. 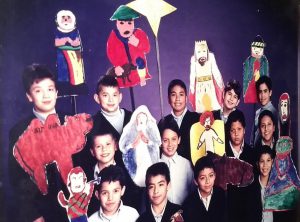 As the school’s enrollment increased, so did the number of staff members, benefactors and community supporters. The school’s successes and subsequent growth led to a need for a new facility. In 2004, Nativity Jesuit moved to its current location at 1515 South 29th Street. The new campus provided a modern and more spacious setting to educate and guide Nativity Jesuit students.

Nativity Jesuit Middle School celebrated its 20th Anniversary in 2013. The festivities also honored Larry Siewert, who was retiring from his new role as Director of Graduate Support.  At the same time, Nativity Jesuit’s leadership was actively planning for the future. Profound growth in school-aged Latino children in the community, combined with the desire of families to send their children – boys and girls – to Nativity Jesuit, prompted the school’s Board of Trustees to look beyond its modest, traditional enrollment of 60 students.

In the fall of 2014, Nativity Jesuit expanded to add elementary grade levels and welcomed its first K4 class which was co-ed as well. That same year, Nativity Jesuit began participating in the Milwaukee Parental Choice Program, a city-wide voucher program for students seeking to attend private schools. Considering the growth of the school from an all-boys middle school to a full elementary school, the school was renamed Nativity Jesuit Academy.

As one of the highest-performing Nativity schools in the United States, and the only one in Wisconsin, Nativity Jesuit is poised to respond to the growing need of Milwaukee’s Latino community, by serving more than 250 students and their families.