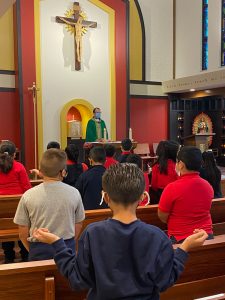 During the 2021-22 school year, Nativity Jesuit Academy underwent the Ignatian Review process which traditionally occurs every six years as a way to affirm our Ignatian identity and provide feedback for the future. As an educational ministry of the Society of Jesus, this provides our sponsorship as a Jesuit institution which is in addition to the traditional Catholic school accreditation process through the Archdiocese of Milwaukee.

Nativity’s last Ignatian Review occurred during the 2014-15 school year when Nativity began a period of remarkable growth as we opened our doors to our first co-ed K4 class. Since then, we have become a full K4-8th grade school, are almost entirely co-ed with the exception of our last all-boy class that will be graduating in June 2023 and an impressive capital renovation to modernize both our 29th St. and Northwoods campuses.

The Ignatian Review process includes a self-study year complete with stakeholder surveys, analysis and a formal write up to submit to the Midwest Province of the Society of Jesus. Based on a foundational Jesuit educational document titled “Our Way of Proceeding: Standards and Benchmarks for Jesuit Schools in the 21st Century,” the review is focused on five main domains: Jesuit and Catholic mission and identity, governance and leadership, spiritual formation, educational excellence and faith that does justice.

Schools undergoing the Ignatian Review host a visiting team for two days of in-person interviews. This team is composed of a representative from our province as well as teachers and leaders from other Jesuit schools, including other Nativity-model schools. Shortly after the visit, we are provided a formal report which ideally includes a recommendation to the Provincial for continuation of our sponsorship as a Jesuit school.

Nativity Jesuit Academy received its recommendation for continued sponsorship as a Jesuit school which will be formalized on November 16, 2022. The final report serves a a guide for the next six years, with commendations on accomplishments and recommendations for Nativity’s future:

The final report offered the following commendations on Nativity’s efforts since our last Ignatian Review:

The final report offered the following five recommendations which Nativity is tasked to work on for the next six years. These recommendations are woven into Nativity’s current strategic plan.

The Society of Jesus has four identified priorities, known as Universal Apostolic Preferences, to guide our work as a Ignatian community over the next decade:

“Lord, teach me to be generous,
to serve you as you deserve,
to give and not to count the cost,
to fight and not to heed the wounds,
to toil and not to seek for rest,
to labor and not to look for any reward,
save that of knowing that I do your holy will.”
-St. Ignatius of Loyola